How life begun on Earth? Well I do not know how life begun in general but specifically for Earth I tend to believe on the theory of Panspermia, ie that life was created somewhere else and then traveled to earth through asteroids. The main reason I believe that this is true is that there is evidense of microbes existing in earth as old as 4.1 bln years when earth itself was only 400 million years old.

Panspermia (from Greek πᾶν (pan), meaning ‘all’, and σπέρμα (sperma), meaning ‘seed’) is the hypothesis that life exists throughout the Universe, distributed by meteoroids, asteroids, comets, planetoids, and also by spacecraft in the form of unintended contamination by microorganisms.

Panspermia is a hypothesis proposing that microscopic life forms that can survive the effects of space, such as extremophiles, become trapped in debris that is ejected into space after collisions between planets and small Solar System bodies that harbor life. Some organisms may travel dormant for an extended amount of time before colliding randomly with other planets or intermingling with protoplanetary disks. If met with ideal conditions on a new planet’s surfaces, the organisms become active and the process of evolution begins. Panspermia is not meant to address how life began, just the method that may cause its distribution in the Universe.

The first known mention of the term was in the writings of the 5th century BC Greek philosopher Anaxagoras. Panspermia began to assume a more scientific form through the proposals of Jöns Jacob Berzelius (1834), Hermann E. Richter (1865), Kelvin (1871),[15] Hermann von Helmholtz (1879) and finally reaching the level of a detailed hypothesis through the efforts of the Swedish chemist Svante Arrhenius (1903).

Fred Hoyle (1915–2001) and Chandra Wickramasinghe (born 1939) were influential proponents of panspermia. In 1974 they proposed the hypothesis that some dust in interstellar space was largely organic (containing carbon), which Wickramasinghe later proved to be correct. Hoyle and Wickramasinghe further contended that life forms continue to enter the Earth’s atmosphere, and may be responsible for epidemic outbreaks, new diseases, and the genetic novelty necessary for macroevolution.

In an Origins Symposium presentation on April 7, 2009, physicist Stephen Hawking stated his opinion about what humans may find when venturing into space, such as the possibility of alien life through the theory of panspermia: “Life could spread from planet to planet or from stellar system to stellar system, carried on meteors.”

Three series of astrobiology experiments have been conducted outside the International Space Station between 2008 and 2015 (EXPOSE) where a wide variety of biomolecules, microorganisms, and their spores were exposed to the solar flux and vacuum of space for about 1.5 years. Some organisms survived in an inactive state for considerable lengths of time and those samples sheltered by simulated meteorite material provide experimental evidence for the likelihood of the hypothetical scenario of lithopanspermia.

Several simulations in laboratories and in low Earth orbit suggest that ejection, entry and impact is survivable for some simple organisms. In 2015, remains of biotic material were found in 4.1 billion-year-old rocks in Western Australia, when the young Earth was about 400 million years old. According to one of the researchers, “If life arose relatively quickly on Earth … then it could be common in the universe.”

Read more about Panspermia at WIKI. 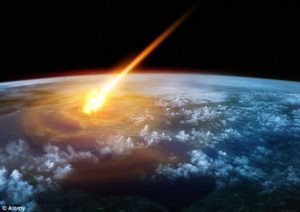 … in Amazon. One beautiful morning, Simos accidentally leaves his body. His soul abandons Earth and heads for the Moon where it wanders across vast, bleak landscapes. Is he perhaps dead, condemned to live for ever in the eternal prison of Hades?

What a story! I had previously played with the exact thought but could not find the reason. Read on, just 5 minutes if you read really slowly… και στα Ελληνικά!

The battle of the Titans

I’ ve just uploaded in youtube “The battle of the Titans” a new Greek mythology video/audio book I created, currently not available in other formats. Enjoy!